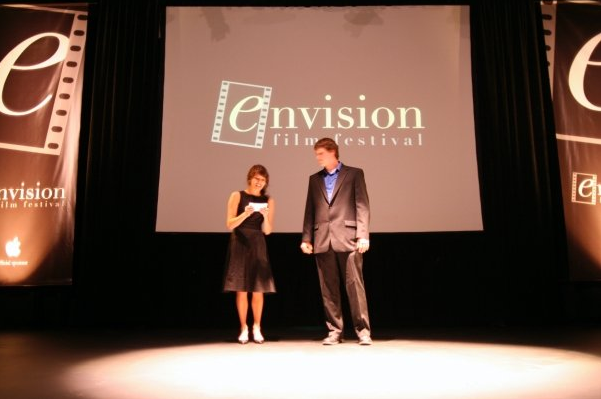 And the award goes to...

Hard work and dedication paid off for film students Friday night at the Envision Film Festival.  Student films, both from Taylor and the Los Angeles Film Studies Center, were shown to a full house in Mitchell Theater to reward the students for their accomplishments.

“The festival is a great way to honor and encourage Taylor’s aspiring filmmakers,” said Festival Co-Chair Kathy Bruner.  “They’ve done some amazing work on their films.”

Senior and student producer for the festival Eliza Dhonau could not have been happier with how the evening turned out.”

“The Envision Film Festival was everything I hoped for,” Dhonau said.  “I was blown away with the professionalism of everyone involved.  The festival really grew and developed this year, and I am honored to have been a part of it.”

The films submitted to the festival were viewed by a panel of judges, and of those submissions, eight were chosen to be in the running for the twelve award categories.  Official sponsors of the festival, including Apple and Sony, donated prizes ranging from cash to cameras.

Seniors Abby Cerquitella and Jared Sorensen received awards for Best Picture and Best Short Film for The Grey Room, a film they directed and produced at the Los Angeles Film Studies Center during the fall semester.

“It’s a privilege to be recognized for our work,” said Sorensen.  “We are happy to see that people were able to connect with our film.”

“I was very eager to tell the rest of our crew we won,” said Cerquitella.  “This has been such an encouragement to all of us.”

Sorensen also won Best Actor for his portrayal in Brandon Hoff’s film, Hey, There’s a Body in the Bathtub, which also won Best Comedy and the Audience Choice Award.  The film tells the story of two buddies who panic when they discover what the film’s title implies.

“The two characters in the film are meant to contrast each other,” said Sorensen, whose nameless character in the film was much more nonchalant than his partner.  “Both characters clearly don’t have a handle on the situation – that’s where the humor is.”

“The film is a behind-the-scenes feature for my short film, Unknown Legacy,” said Schwartz.  “I’ve always enjoyed watching how movies were made and was excited to tell the stories behind mine.”

With this year’s festival over, eyes have already turned towards next year.
“This year was such a pivotal year in the festival’s history,” said Dhonau.   “I cannot wait to see what great films future years produce.”